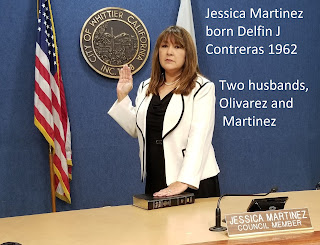 THIS IS A BREAKING STORY. CHECK BACK FOR UPDATES.

UPDATE: 01/14/2021 "All Whittier City Councilmembers voiced their disappointment in Martinez." The measure to formally censure her failed as Jessica Martinez herself voted against the measure for the deciding vote! What the hell? She legally had to abstain, recuse herself from the vote due to conflict of interest! Read the linked article below. What Jessica Martinez herself says is absolutely unbelievable! I personally believe she needs mental health assistance.

01/13/2021 If you read Jessica Martinez' tweets she has committed sedition which is a crime, i.e. conduct or speech inciting people to rebel against the authority of a state or monarch. Jessica Martinez has repeated the big lie that the election was a fraud and stolen. Jessica Martinez has repeated all of the lies about the election stated by Donald Trump, Rudy Giuliani and people from Stop the Steal. She literally retweeted, repeated those exact same lies. We had a very fair election. She needs to be removed from office immediately.

"Zenaida Huerta has started a petition online at the actionnetwork.org sponsored by Democrats for Justice.

The petition states, “On December 29th, Whittier Councilmember Jessica Martinez (District 1) tweeted that she was willing to “give up [her] life” to “take back” her country. Just seven days later, she was part of the violent, armed coup attempt on Capitol Hill. This was an act of domestic terrorism.”

Martinez announced her intent to participate in the rally on Twitter alongside multiple tweets questioning the legitimacy of the presidential election and branding Republicans who accepted the result as “traitors.” On Wednesday morning, she also uploaded a clip of video footage from the rally.

There is calls to censure Martinez, County Supervisor Janice Hahn also added her voice to those calling for Martinez’s censure.

“Any attempt to delay or prevent the peaceful transfer of power is a threat to our democracy and there must be consequences,” Hahn said Friday in a statement.

Martinez has responded to racist tweets with equally racist tweets. AFter on tweet about Somalia-born Rep, Ilhan Omar, D-Minneapolis, Martinez tweeted “she can go back wherever she came from and REALLY be a victim” or saying about U.S. Sen. Elizabeth Warren, D-Massachusetts, “President Pocahontas? She needs a Wigwam not the white house.”

The petition finishes, “If you believe that domestic terrorists have no place in our city council, sign this petition to urge Mayor Joe Vinatieri to censure Councilmember Jessica Martinez from the January 12th city council meeting. Make sure you also email ccd@cityofwhittier.org before January 12th with public comment demanding Martinez be prevented or “censured” from participating on the city council.”

Article in LA Mag about Jessica Martinez in Washington.

Whittier City Council considers censuring Jessica Martinez for her involvement in the January 6, 2020 event in D.C.

ORIGINAL: Who is Whittier City Council member Jessica Martinez? Based on our research she was born Delfin J Contreras January 1962. Her first husband that we know of was Felix Cruz Olivarez born 1954 in Los Angeles, California. They married in 1983 and had one child Alexandra Nicole Olivarez born 1984 in Los Angeles. Jessica Martinez married her second husband Paul James Martinez born 1966 in 1997. Her husbands had other wives and probably had other children.

Political information from these sites below. She ran for office three times, lost twice for State Assembly and won the last time for City Council. Everyone knows you start running for City Council then run for Assembly or higher office.

She may have two older brothers, Nicholas "Nick" and Christopher. Her father may be Nicholas Contreras 1920-1989 born in Colorado, died in California and her mother may be Dorothy Jimenez Contreras born 1928. This is based on the fact that Jessica lived at the same address as Nicholas, Dorothy, Nick and Christopher. That address was the home of Nicholas Contreras. There is a Find A Grave for Nicholas Contreras. While the birth and death dates are correct the text has not been verified. Directories show his career as "salesman" for Foremost Dairies only. Foremost was bought out by Knudson. The company owned the trucks, not the drivers. There is no listing stating he owned a fruit and vegetable truck of his own, had his own business or owned the milk delivery routes. The routes and milk were owned by the company.

Jessica's grandparents were from Mexico. The father is listed as having worked in the mines in Utah along with his father and brothers.

We tried to verify Jessica Martinez' education. As far as we can tell she went to Sacred Heart of Mary High School in Montebello. We have emails out to the schools she stated she attended. The "law school" she claims to have attended is not accredited by the American Bar Association. It would not qualify you to take the Bar exam in any state except California. That's because California allows anyone to take the bar exam even if they never went to law school or even high school or college. Jessica Martinez did not pass the Bar exam. She is not a lawyer.

Jessica Martinez claims to be a teacher. We have found no evidence that she is a teacher. Her education doesn't even state she received teaching credentials. Maybe she home schooled her daughter and believes that counts as being a "teacher?"

An email was sent to Jessica Martinez yesterday asking her to confirm or deny the facts of this article. We asked her about her husbands' service in the military, her education, her family and her past. It was sent to both of her email addresses which she uses i.e. jmartinez@martinezforassembly.com, martinezdjm@gmail.com The mail went through. There was no reply. Jessica Martinez had the chance to contribute to this article but refused. We will update this article when we hear back about her education. 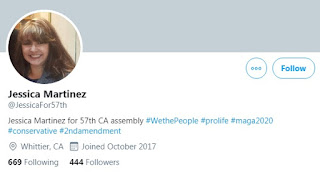 This woman is a major Trump supporter. She is also spreading the false information about voter fraud on Twitter and elsewhere. She spreads crazy conspiracy theories. She calls all Democrats "communists." She attacks our California Governor. She attacks groups that support Latinos. She supports Joy Villa who lies about being Latino. She supports all of the election conspiracy theories. She states the Covid vaccine will cause men to become infertile. She posts #MAGA2020 #BLEXIT #NRA She threatens people.

"Jessica Martinez @JessicaFor57th Dec 22, 2020  Let your representatives know that they had better do what the President says or they are done!"

Jessica thinks people who are against Fascists are Nazis.

"Jessica Martinez @JessicaFor57th Aug 20, 2019 This is antifa. They do not want peace; they want control, just like the Bolsheviks, the communists in Cambodia, and the Nazi brown shirts."

"Jessica Martinez @JessicaFor57th Aug 18, 2019 Looks like a duck, walks like a duck, talks like a duck, it is a duck.Hitler's Nazi brownshirts beat up people on the street, rioted, destroyed property, shut down free speech and talked about overthrow of a lawful government, they were socialists, AND they wore the same  color." 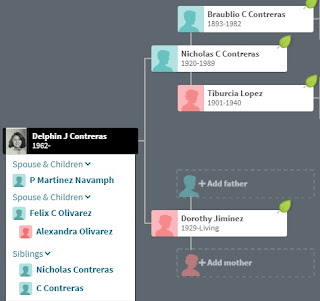 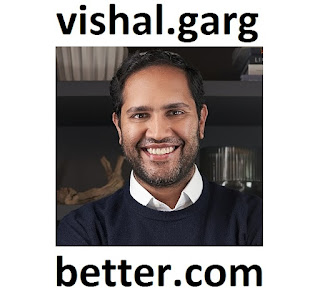